Time to cast another role in the movie Ember.

The hero can only be special with the RIGHT antagonist. The big bad! My original pick for Devon Wahlberg (arch rival to Max Valentine) was Kellan Lutz. 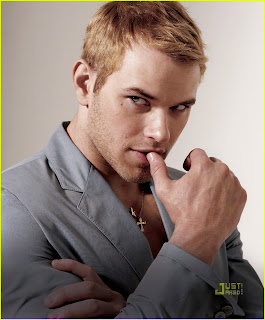 He's best known for the "Twilight" franchise but before all the sparkly vampires he was "king ding-a-ling" on the relaunched 90210. His big build and cocky swagger fit Devon's character perfectly. With the relaunch of Ember just around the corner (Feb. 29th 2012) you'll see what I mean...

...feel free to throw out a pick and we'll see you next week with another cast member...M.

Posted by Madison Daniel at 7:10 AM