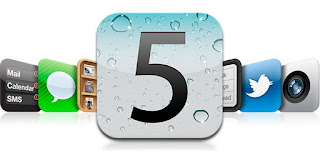 After the monumental disappointment of NOT getting an official iPhone 5 (instead the 4s showed up...ugh...) there is finally a silver lining in the technology cloud. iOS 5, shiny and new, has a few surprises for your iPhone and iPad. Updates to the camera are welcomed(new grid & editing). New messaging is a blessing(free messaging to anyone running new iOS 5). Twitter is now part of the whole Apple experience(not too different if you already had the Twitter app). Most importantly is iCloud...
Streaming and syncing your busy lives is easy and almost seamless with iCloud. Apple only offers a free 5 gig storage which might become an issue later on BUT Apple will let you upgrade to bigger storage(Yay!) for a price(Boo!).
Everything with the new OS is still a little new to me, I'm finding something new everyday with it. I'll have a more in depth review in the future, after I've had a few months to play with it. So far, so good though.
Keep the surprises coming Apple. Now bring on the new iPad!
M.D.
Posted by Madison Daniel at 10:24 AM