It's the end of the week and time for another review. This week I thought I'd talk about one of my favorite movies. It has inspired almost all my writing. 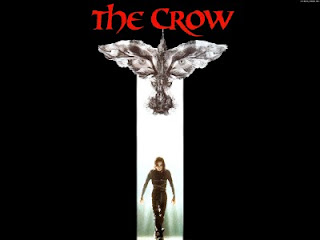 Dark, gritty, violent and filled with dying hope. I find the visual ugliness in the movie...beautiful. The story of future rockstar, Eric Draven and his murdered girlfriend is tragic and filled with hope. When the young couple are murdered in their apartment by the scum of the city, Eric is brought back to life one year later to exact revenge on the ones who wronged them.

Eric is poetic justice in evil clown makeup. As he finds the people responsible for his (and her) death, they fall to his vengeance. With each kill he is brought closer to what he wants the most...peace with the girl he will always love...even in the hereafter...

The movie is filled with clever fight sequences and fantastic music. The soundtrack is just as popular as the movie. The character has become a mainstay at Halloween over the years. There has been 3 sequels made (None of them even half as good as the first!) and a short lived TV show. Recently the property has been dusted off for a new Hollywood remake. Big mistake! The Crow is one of those movies that does not ever need to be remade...is it the perfect movie? No, but it is a classic.

The spirit of this movie is what makes it appealing to me. True love never dies...